January 19, 2015 Christy D Uncategorized Comments Off on “DO quote me” – an update 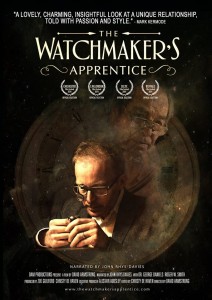 We had Official Selections at several international film festivals (including Buffalo and Chichester), made a short film for our protagonist Roger W Smith for his ‘GREAT Britain’ watch (a unique timepiece handcrafted for No.10 Downing Street’s ‘GREAT Britains’ campaign), put the proverbial wheels in motion following an exciting invitation to screen the film in New York for a globally respected luxury magazine- not to mention other offers to screen in LA, Shanghai, Hong Kong… ; and we had an utterly lovely email from Mark Kermode and his agent Hedda, with this quote about our film, after he attended a private screening at the end of 2014:

“A lovely, charming, insightful look at a unique relationship, told with passion and style” – Mark Kermode, BBC Reviewer and Chief Critic for The Observer.

This year is the year we finalise distribution of the documentary, so we can get it out there to everyone who has shown such fantastic interest and support since the initial exclusive short preview back in 2012 at the Saatchi gallery. Once distribution is finalised, we will then also be looking to getting the film broadcast – both nationally and internationally – so watch this space for further updates!

In the meantime, all the best for the coming year, may be it be happy, healthy and peaceful for you all and thank you for your ongoing support.

The Watchmakers Apprentice – SalonQP 2012
Two US screenings, an award and a release date