September 18, 2015 Christy D Uncategorized Comments Off on Film Out Now! 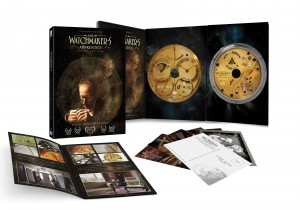 Following a successful run of screenings at film festivals and more recently at Tribeca Cinemas in New York and Birmingham School Of Jewellery with Q&A’s with Roger Smith, Bulldog Film Distribution is pleased to announce the UK release of The Watchmaker’s Apprentice, available digitally (from iTunes UK) and on Special Collector’s Edition DVD from 21st September 2015; order now from Amazon.

The Watchmaker’s Apprentice is a fascinating portrait of two remarkable men. It tells the incredible story of George Daniels’ rise from Dickensian poverty to become the world’s greatest living watchmaker and the one man who, through relentless tenacity, would become accepted as his one and only apprentice: Roger W Smith.

The Watchmaker’s Apprentice is a unique testimony to their extraordinary craft, touching relationship and unique personalities. It’s about gentle obsession and inspiring perseverance; a compelling insight into what makes the greatest mechanical artists tick. It is about time itself and the opportunities we have to leave an eternally lasting imprint on the world from our fleeting existence.